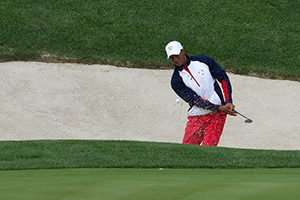 As captain of Team USA for the 2014 Ryder Cup, Tom Watson is going to be faced with some very difficult decisions. With the current standings for the Ryder Cup team, two of the biggest names in golf would not automatically qualify and need to be selected using a Captain’s pick – Phil Mickelson & Tiger Woods.

Following his worst 72-hole finish in a major, Tiger Woods was asked if he would be inclined to pick him if he were in Watson’s position. His response: “I would say yes.”

For both teams, 9 players automatically qualify based on points. The points are determined through the following:

Below are the current Ryder Cup standings for Team USA as of July 21st:

If you were Tom Watson, what would you do? Would you select Tiger Woods and Phil Mickelson if they don’t automatically qualify with how they are currently playing?