Golf Basics: Understand the difference between chipping vs. pitching to add versatility to your short game

Editor’s Note: This is an updated version of the original article posted on April 15, 2015.

To the non-golfer or golfers just beginning, chipping and pitching might seem like very similar shots. Both are basic short game shots and can be achieved with a wide range of clubs.

However, many golfers don’t know the difference between two, and their one-size-fits-all approach often adds strokes to the scorecard.

When looking a professional golfers who exhibit superior proficiency and consistency with their short games, it’s key to understand their consistent quality of contact and variety of shot choices are accomplished successfully by understanding basic setup and technique differences between chipping and pitching.

The most common definition of a chip shot is that it has more ground time than air, with very little carry and more time bouncing and rolling on the green. This shot often occurs very close (within a few yards) from the green and requires a smaller swing than a pitch shot.

A pitch shot is contrarily one that spends more time in the air than on the ground, with more carry, a has a higher trajectory and more spin that helps it stop faster after it lands on the green. Pitch shots often occur farther away from the green than chip shots, and thus require a slightly longer swing. 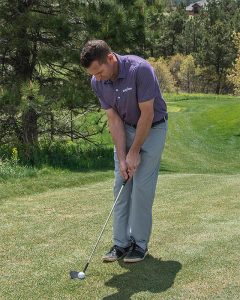 To accomplish this, start with a narrowed stance, about 80 percent of your weight on the lead foot and ball positioned back in the stance. A good measure for ball position is to place it just forward (toward the target) of the big toe of your trail foot. The handle of the club should be about even with your lead thigh (not much more forward than a normal setup position), and you will also need to stand closer to the ball and raise the handle, so the shaft is at a more vertical angle.

Also, while using a wedge is often the right club for these shots, it’s also often wise to pick an 8- or 9-iron because it can be more predictable than a higher-lofted wedge. 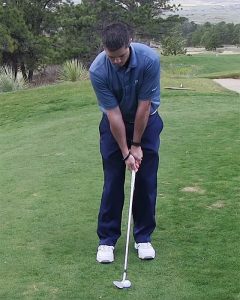 The setup for a pitch shot is very similar to a chip shot, but your weight remains more centered, with only about 55 to 60 percent favoring the lead foot.

Your knees should be also be slightly more flexed than with a chip shot, feet slightly farther apart, and a ball position more forward (in the middle of your stance) with the handle location remaining neutral.

The strike of a chip shot is slightly different than a pitch shot. Most chip shots are struck ball first, compared to pitch shots that see the ball and ground contacted at about the same time.

Simply stated, this difference occurs because the ball-back, weight-forward setup of a chip shot creates a steeper attack angle and contact occurring earlier in the downswing in relation to where the swing arc bottoms out.

The chip shot setup also keeps the clubhead’s loft reduced to create lower trajectory shots in comparison to pitch shots, which yield higher, softer shots with more spin from a setup encouraging a shallower attack angle, more use of the club’s bounce and an impact point closer to the bottom of the swing arc.

With the above differences in chipping and pitching technique stated, here’s a helpful tip from GOLFTEC’s Brad Skupaka that will help put your newfound knowledge into play and save you strokes on the golf course!

Want more help with your short game? Find a GOLFTEC near you and talk to a Coach today!