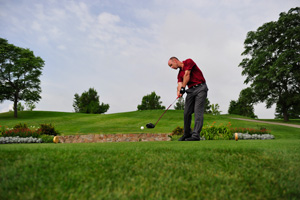 Every golfer could benefit from added yards off the tee. At the elite level, where 280 yard drives mean you are average, there is a strong correlation between driving distance and ranking on the money list. It is fair to say that adding yards to the average golfer’s tee shots would help them shoot lower scores and have more fun.

Golfers are routinely told to resist their hip turn and maintain the flex in their knees in an effort to coil like a spring and store more power. While following this advice golfers not only do not hit the ball farther, they typically create other compensations – compensations such as lifting and bending their arms in an effort to hit the ball any distance at all. The longest hitters on tour demonstrate the opposite of the advice the average golfer is told to follow by changing the flex in their knees and turning their hips the most.

There are many factors that are going to affect the overall distance the golfer is able to drive the ball, but storing more potential energy creates the best chance for the golfer to maximize their club head speed at impact. When the golfer resists the turning of their hips, even for the most flexible of individuals, it will severely limit the distance the club travels in the backswing, will limit the potential power the golfer is storing and make it difficult to deliver the club on plane. See the swing below and the associated hip turn and shoulder turn numbers. You will see that both of them are red, indicating that they are well below the Tour average. 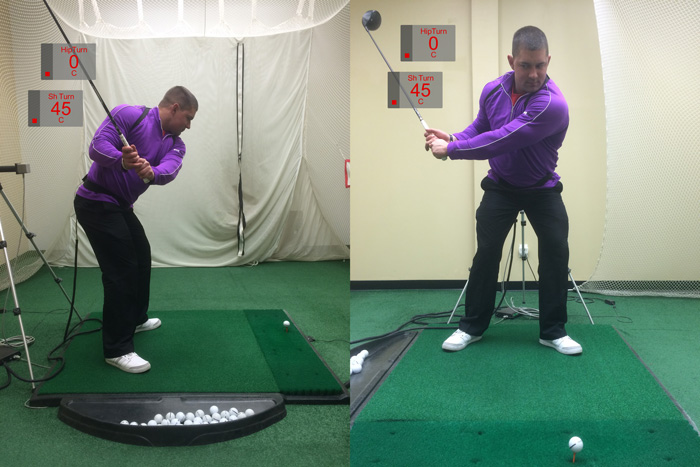 In order to create a proper shoulder turn the hips must also turn and the knees must change their flex. As you begin your backswing allow the lead knee to flex and the trail knee to straighten, while turning your hips away from the target. How much? The farther you want to hit it the more your hips and shoulders should turn. When you get to the top of your backswing your trail leg should be nearly straight, hips turned the most, and shoulders turned the most in order to store the most potential power and set the stage to hit the ball farthest. You’ll see in the swing below that by doing this your shoulder turn and hip turn numbers will now be green, indicating they are in line with the Tour averages. In both images the golfer has created the same “coil” between his hips and shoulder, however in the image below he has allowed the club to travel a greater distance in the backswing by allowing the hips to turn more, thereby storing more power. 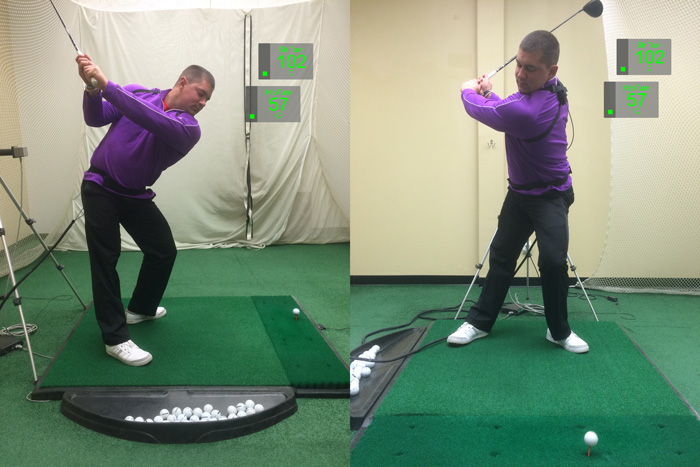 If you watch the longest hitters on the PGA Tour, you’ll see this from them off the tee. Take Bubba Watson for instance, who averaged 314.3 yards per drive in 2014. At the top of his backswing, Bubba’s trail knee is almost completely straight with his hips and shoulders turned as much as possible. Even Rory McIlroy gets to the top of his backswing with a fairly straight trail knee and large hip and shoulder turn, resulting in an average of 310.5 yards per drive in 2014.

Do you know what your hip turn and shoulder turn numbers are and where they fall in relation to the Tour average? Come visit your local GolfTEC Improvement Center to quantify your swing today.