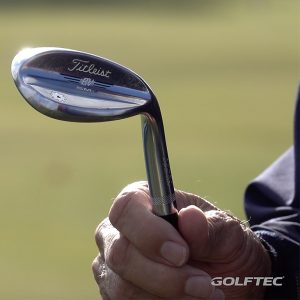 You never know what kind of behind-the-scenes stories you’ll hear when hanging around a legendary wedge designer like Bob Vokey.

After all, 45 years in golf club design and a high-profile position as Titleist’s master wedgemaker since 1996 does create some incredible fodder.

This was never more apparent than when GOLFTEC visited Vokey’s home away from home, the Titleist Performance Institute, and Vokey opened up about Adam Scott’s last-minute wedge grind change two weeks before his 2013 Masters victory.

Vokey, of course, has endless stories of his encounters with tour pros.

But this one – a mere sampling of his immense influence on the best players in the world – has to make you wonder: How many of tour pros’ victories are due, at least in part, to this talented man behind the grinder?

Check out the video below where GOLFTEC’s Jon Levy and Dave Pauley hear how Vokey slid a brand new wedge grind into the hands of Scott, who walked away as the Masters champion using it just two weeks later.

If you’re ready to fully dial your wedges in as well, schedule a TECFIT at a local GOLFTEC today!

Fix That Weak Slice With This Hip Rotation Drill