As seen on Golf Channel: Increase distance from the tee with these power moves created in your downswing 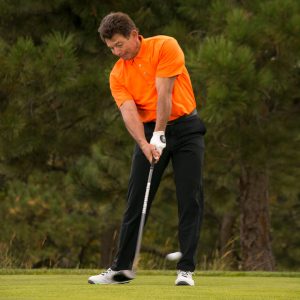 While distance increases in golf are hotly debated, there’s no doubt the world’s best have realized significant gains.

During the 2017-18 season, the number of players averaging 300 yards or more jumped 50 percent compared to the previous season. Arguments abound whether that’s due to equipment and launch monitor advances, golf ball, physical conditioning, or a combination of the above.

Regardless, the game is getting longer – but many of us aren’t.

Of course, jealousy can exist that we don’t hammer drives like Rory McIlroy or Dustin Johnson. But many golfers feel a justified degree of frustration with their inability to join the new-age distance party, when it seems so easy for the world’s best.

So, while the fact remains that we may never have Rory or DJ length, there are adjustments we can make to help increase driver distance to our own potential, whatever that may be.

Core power in the downswing

There’s a common mistake many golfers make that robs them of distance. It occurs at the start of the downswing, when the hips thrust toward the ball and the head simultaneously moves away from it, lifting up vertically.

What that translates to is a significant loss of shoulder tilt at impact; a key ingredient to the best golfers’ swings.

A good way to combat this distance-draining move is feeling two things as you start the downswing:

When these two elements occur, it will be easier for your hips to start moving toward the target at impact and in the follow through, which is an ideal way to swing. It will also help you finish the swing with your back slightly arched away from the target, which is another characteristic embodied the best golfers.

Like many drills and exercises we give here on the Scramble, start by practicing this new movement at slow speed without a ball. After you feel like you’ve got the move down with consistency, ramp it up to your full swing. Once you’re proficient there, start hitting shots in the same manner – slow and steady at first, then increasing speed to full swings as you feel comfortable.

With some diligent work and consistency with this drill, you’ll be surprised how much farther the ball will fly. And, who knows, you might even start giving those big hitters a run for their money.

VIDEO: Core Power in the Downswing for Speed

Patrick Nuber demonstrates how to properly generate core power in the downswing for more distance with the driver.