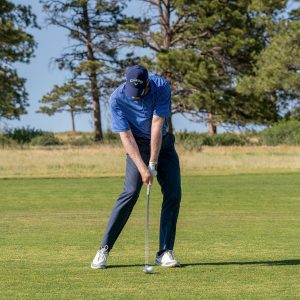 Watching golf on the weekends should be relaxing. However, you could be sitting there watching Rory strike an iron perfectly and then the commentators ramble on for five minutes about some golf term you’ve never heard of, and you’re left with a blank stare on your face.

You can argue that sometimes the commentators can go way in the ditch on some topics, but when it comes to angle of attack, you better listen up.

Angle of attack refers to the degrees downward or upward you hit the ball. It’s important to note because angle of attack directly impacts your contact. But instead of going into too much detail, we’re going to help ensure your angle of attack is just as good as the pros with this simple drill.

The pros have an average angle of attack of 4º to 6º down. That guarantees ball-first contact. However, the average amateur golfer’s angle of attack ranges from 10º down to 2º up, which makes total sense since amateurs are inconsistent with their irons.

So, why are amateurs so unpredictable with irons? Well, one of the main reasons comes down to a simple swing mechanic that a lot of golfers struggle with, the chicken wing.

Some golfers approach the ball with their knees bent, their hips close to the ground and start to shallow out the hit by bending their lead arm, a.k.a. the chicken wing. That movement can cause an erratic angle of attack, which is hard to control contact.

That’s how you don’t want to hit your irons and we have a drill to show you how you should. To begin this drill, your goal is to brush the grass while keeping your arms and legs very straight from about when the club is parallel to the ground on the backswing, all the way through the follow-through.

Once you start grooving with this new motion, add a ball and begin chipping shots down the range. Eventually, you’ll be able to integrate this into a full swing with the proper angle of attack.

To see this drill in action, watch GOLFTEC’s Nick Clearwater demonstrate it in the below video.

VIDEO: Improve your angle of attack