If you haven’t retired your 1-iron and replaced it for a new utility iron like Titleist’s new U500, you’re missing out

Some people believe only God can hit a 1-iron. I’m not going to dive too deep into that age-old saying, but I will say without a doubt, long irons, especially 1-irons, are tough to hit.

If you still have one of those bad boys in your bag, you’re seriously making this tough game, that much more difficult for yourself. You even have equipment manufacturers on your side who are continually trying to make it a little easier for you with the help of technology and the creation of utility and driving irons. 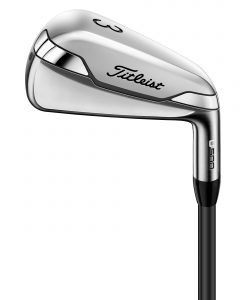 That makes sense to a lot of us, but I know there are probably some skeptics out there reluctant to let go of their trusty 1-iron. So what better to do to hush the critics? We put a 1-iron head to head with a new utility iron. And let’s say, the results speak for themselves. After you watch the video, stop into your local GOLFTEC, and we’ll get you fit into the perfect utility iron to replace your now, trivial 1-iron.

Demo and purchase the Titleist U500 & U510 utility irons at GOLFTEC!