“While you were getting better, so was P790” 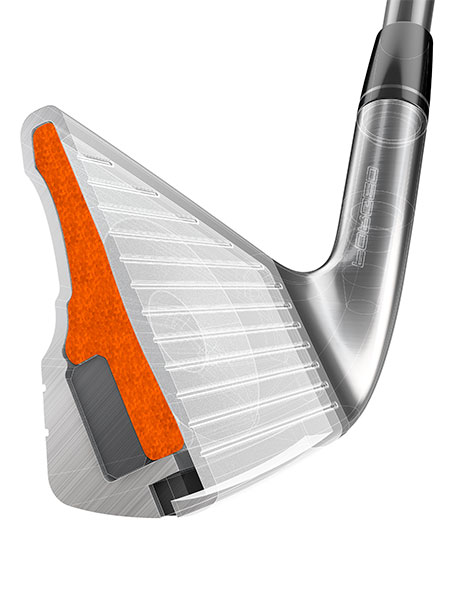 With the launch of the P790 irons, TaylorMade’s engineers answered the challenge of creating a forged iron that delivers remarkable distance. The engineers started with a hollow cavity and injected the cavity with their revolutionary SpeedFoam™ technology which is an ultra-light urethane foam engineered to push the design limits of face speed while simultaneously improving feel. They also added in their Speed Pocket™ to maximize ball speeds and provide forgiveness on shots lower on the face.

Due to the success of the P790 irons, TaylorMade rallied around the idea that “you don’t mess with what works, you make it better.” In September 2019, the new P790 irons launched with several new advancements. The new P790 irons include a low profile tungsten weight designed for a lower CG and higher launch. They also feature a patented Progressive Inverted Cone Technology strategically located in each iron designed to improve accuracy and protect off-center ball speed.

The P790 irons are for the better player that wants the workability and the feel of a forged iron with more distance. The P790s help increase ball speeds providing distance gains and are more forgiving than a standard forged iron while keeping a classic look.

Demo and purchase all TaylorMade P790 irons at GOLFTEC

TaylorMade wasn’t done improving the P790 line of irons and have now released the P790 Ti. The Ti version includes a titanium body that uses 9-1-1 titanium and machined 6-4 titanium for the face forming a super lightweight hollow body designed to deliver explosive distance and forgiveness.

Using titanium over stainless steel allowed engineers to save a lot of weight which enabled them to add tungsten weighting into the back bar of each iron. This helps produce a higher launch and low spin trajectory to maximize distance.

You really can’t go wrong with any version of the P790 irons and should experience the triumph of engineering at a GOLFTEC Club Fitting.

Demo and purchase all TaylorMade P790 Ti irons at GOLFTEC!