As seen on Golf Channel: Start driving like the best players on the PGA Tour by adding shoulder tilt

The recent trend of young guns on the PGA Tour absolutely crushing it doesn’t seem to be slowing down.

Not only are they entertaining to watch, but their games from tee to green are so dialed in that it makes us want to tune up our own.

For example, 2017 Fed Ex Cup champ Justin Thomas  has a golf game and swing to envy. By no means is he the biggest guy out there, but he sure can smoke the ball with the best of them.

So how does Thomas get that much distance out of his small frame and swing?

Well, the way he tilts his shoulders has a LOT to do with it.

What is shoulder tilt?

As referenced in the GOLFTEC SwingTru Motion Study, shoulder tilt is the angle of the shoulders measured against a level (upright-standing) position.

We’ve previously discussed how shoulder tilt is a core factor of golf posture, and how crucial this movement in the swing is for consistency. When it comes to Thomas, the shoulder tilt he demonstrates in the backswing and follow-through are significant contributors to how he hits the ball so well – and with a lot of power. 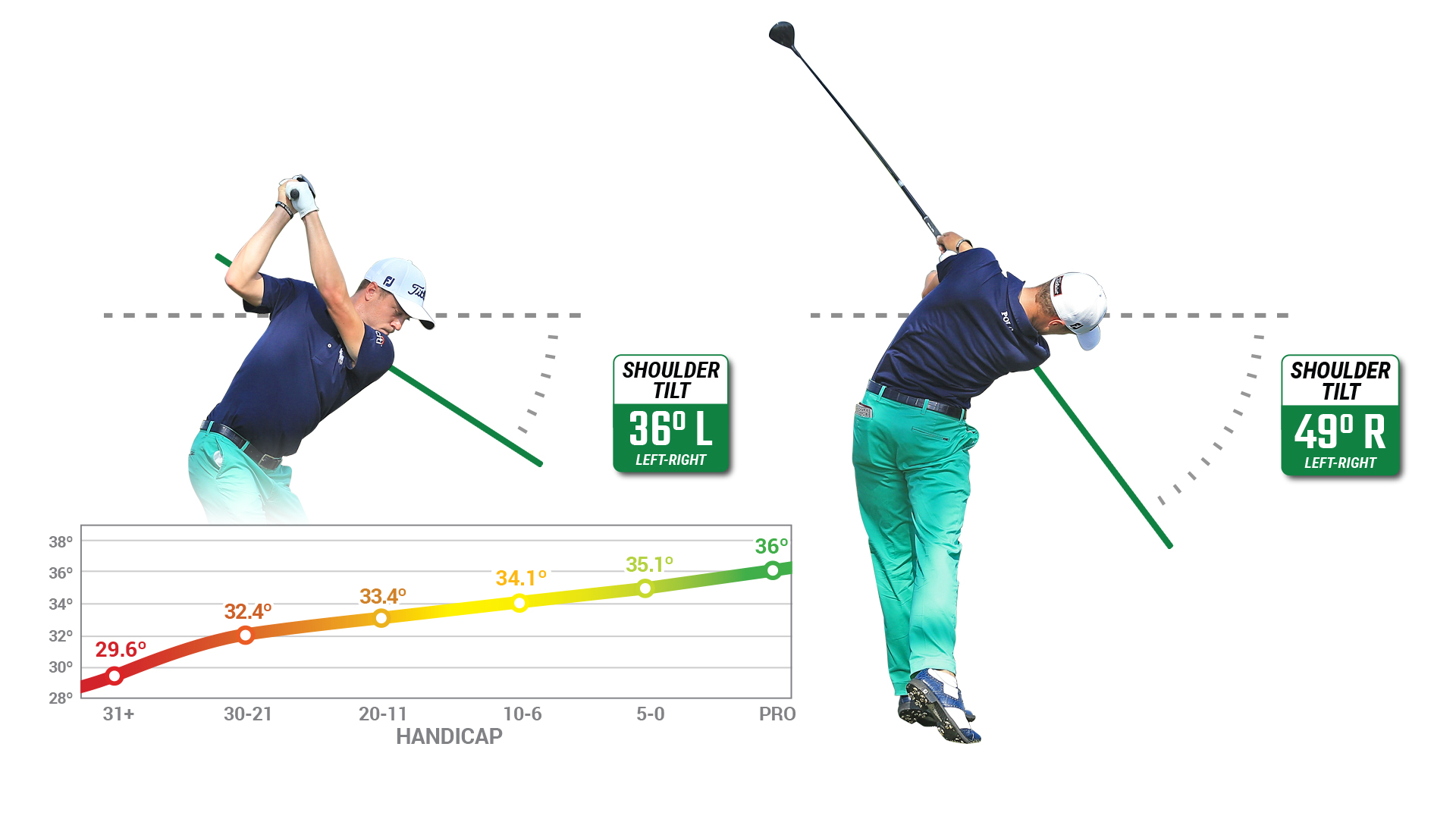 Why shoulder tilt is important

The image above notes two key positions of Justin Thomas’ swing where shoulder tilt is crucial: the top of the backswing and in the follow-through, when his hands have reach the same level as his lead (left) shoulder.

As opposed to many high-handicap golfers that stand up and lose shoulder tilt in the backswing, maintaining it like Thomas (image-left) helps keep the head remain in relatively the same position as address. Among other positive benefits, this can yield an increase in shoulder turn and a longer backswing – two key ingredients for power and solid contact.

The second position shown (image-right) is another key power move of the best golfers, as maintained shoulder tilt in the follow-through is often a byproduct of a shallow angle of attack at impact. This helps to keep spin loft down and launch the ball high, straight and far – as opposed to golfers that lose tilt and hit the ball poorly from an attack angle that’s too steep, among other factors.

Check out the video below where Patrick Nuber breaks down Justin Thomas’ shoulder tilt with Morning Drive’s Charlie Rymer, while giving a drill that can help you improve the tilt in your swing and work toward smashing drives like JT!

If you’re not sure if this tip is for you, talk to a Coach at a GOLFTEC near you today!

A driver for all- Titleist releases new TSi1 and TSi4 drivers