Jon Levy plays a round of Speed Golf with World No. 2 golfer, Lexi Thompson, ahead of the 2017 Solheim Cup 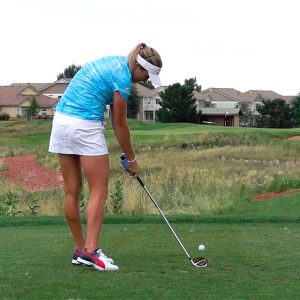 Current women’s World No. 2, Lexi Thompson, is no stranger to the spotlight.

She did, after all, play in her first U.S. Women’s Open at 12 years old, turn pro at 15 and win her first major at the 2014 Kraft Nabisco Championship. Now 22, she’s amassed eight LPGA Tour victories, nearly $7 million in career earnings and can even add ‘Olympian’ to her resume after competing for the USA in the 2016 Rio Olympics.

That’s impressive for an entire career, much less just the start of one.

Which is why when Thompson, an Official Ambassador for the LPGA*USGA Girls Golf initiative, stopped through GOLFTEC’s backyard less than a week before the 2017 Solheim Cup for a First Tee of Green Valley Ranch junior clinic, our Jon Levy was on the scene to find out what makes this talented golfer tick.

In the video below, Levy and Thompson play a quick round of Speed Golf where Thompson calls out the most talented golfer in her family (it’s not her!), answers whether or not she’d play a PGA Tour event if given the opportunity, and may even throw out a prediction for this year’s Solheim Cup.

So check out this latest Speed Golf with Lexi Thompson, and help us cheer her and Team USA on this week in Des Moines at the 2017 Solheim Cup!

Find a GOLFTEC near you and talk to a Coach today!