As seen on Golf Channel: Stop hitting shots on the toe by practicing this simple drill focused around your trail arm 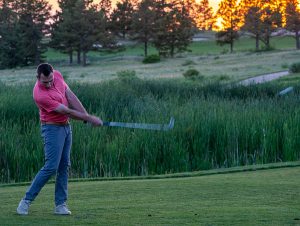 You know that pure, euphoric feeling right after you’ve struck a ball dead-center on the clubface? Unless you’re a pro, it’s probably more elusive than you’d like.

If this sounds familiar and you’re specifically plagued by toe hits, we have the perfect drill to help you start hitting flush shots more often. It starts with how your trail arm moves in the downswing and follow-through.

Toe hits can hit the road

A common cause of off-center hits on the toe is found in the downswing when the club handle remains too close to the body, instead of extending out toward the ball as it reaches impact.

The good news about this? The fix doesn’t involve hours of scouring the dirt for secrets.

The even better news? Rectifying toe shots is a simple as straightening your trail arm in the forward swing.

To start, set your club aside and take a few arm swings while focusing on stretching your trail arm out as far away from your body in the downswing as possible. From impact into the follow-through, you should feel that your arm is fully extending toward the target as noted in the example above.

Once you have a good grasp of this new move, grab your club and make some practice swings without a ball to get the feeling down. Then add a ball and start with half swings, before moving to full swings once you can maintain this move with consistency.

Ultimately, this drill will help you develop a feel for hitting the sweet spot from a better move with your trail arm. It’s not rocket science, but it will take practice to change your pattern so keep with it until you see results.

GOLFTEC VP of Instruction, Nick Clearwater, appeared on Golf Channel’s ‘Morning Drive’ to talk about those pesky toe hits and demonstrate how to fix the issue with a simple drill.